In 1864, a French scientist named Louis Pasteur invented a way to make milk last for a long time before it spoiled. His idea is still used to this day. It is called pasteurization. 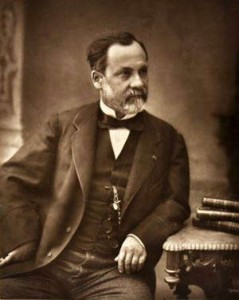 In 1824, a Frenchman created a special kind of writing that allows blind people to read. It uses groups of raised dots that stand for letters of the alphabet. This invention is called braille. Its inventor, Louis Braille, was only 15 years old when he came up with this idea!

Louis Braille was born in Coupvray, France, near Paris on January 4, 1809. At the age of 3 he was playing with a sharp awl in his father’s harness making shop, when he accidentally poked his eye, and subsequently developed an eye infection causing total blindness. He attended the local school until 1819, when he was awarded a scholarship to the Royal Institution for Blind Youth in Paris where he was the youngest student. While there, Braille yearned for more books to read. He experimented with ways to make an alphabet that was easy to read with the fingertips. He started by working on a reading code with a special tool he developed called a slate and stylus. In 1824 at the age of 15, he invented the 6-dot Braille system that evolved from the tactile “Ecriture Nocturne” (night writing) code invented by Charles Barbier de la Serre to send military messages that could be read on the battlefield at night, without light. In 1829 he published his work in Method of Writing Words, Music and Plain Songs by means of Dots for Use by the Blind. He then spent the majority of his life working on this tactile reading and writing system.