France is one of the largest countries in Europe. It is surrounded by both land and sea. It is bordered by seven other countries: Belgium, Luxembourg, Germany, Switzerland, Italy, Andorra, and Spain. Even so, almost half of France’s border is coastline.

The shape of France: France has six sides. It has three land borders and three coasts. Mountains form a border on two sides and the sea on three more. The sixth side, the north-east, has no natural border. France is often called the Hexagon. The French landscape varies greatly. In some places, there are high mountains and thick forests. In others, there are rolling fields and sandy beaches.

France is a Republic. This means it has an elected leader called President. France first became a republic in 1792, after the French Revolution in 1789, when the king was overthrown as a leader.

The Tricolore flag became the French flag at the time of the French Revolution in 1789. The National Anthem is called La Marseillaise. It was originally sung during the Revolution by soldiers from Marseille. 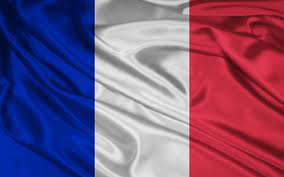 France is divided into 22 regions, including the island of Corsica in the Mediterranean. Each region has a name. Some of them date from the Middle Ages. France is also divided into 96 departments. Most are named after the main river running through them and each one has a main town.

The north of France has cold winters, warm summers, and plenty of rainfall. In the south of France it is hot and dry in the summer and warm and sunny in the winter.
The French call the south coast the Côte d’Azur, which means “sky-blue coast”, because of its good weather.

In the east, the high mountains of the Alps are covered with snow all year and the scenery is spectacular. This is very popular for skiing in the winter and hiking in the summer.

Normandy, in the North, has a flat coastline with long sandy beaches. The coastline of Brittany in the northwest is rocky with many inlets.

There are vineyards all over France. Most regions produce their own wine. Champagne and Burgundy are some of the best known.