French people are famous for making and wearing beautiful fabrics and clothes. For example, people in France came up with the idea of lace about 700 years ago. 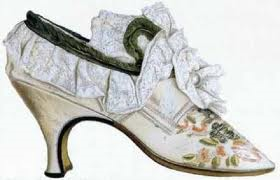 High-heeled shoes were invented in France more than 400 years ago. In those days, men wore high-heels. Nowadays, it is usually women who wear these shoes.

More than 300 years ago, French people came up with the idea of wearing neckties. The first neckties were called cravats. The French also invented suits more than 200 years ago.

Haute couture refers to the creation of exclusive custom-fitted clothing. Haute couture is made to order for a specific customer, and it is usually made from high-quality, expensive fabric and sewn with extreme attention to detail and finished by the most experienced and capable seamstresses, often using time-consuming, hand-executed techniques. “Couture” means dressmaking, sewing, or needlework and is also used as a common abbreviation of haute couture and refers to the same thing in spirit.“Haute” means elegant or high. An haute couture garment is made specifically for the wearer’s measurements and body stance.

In modern France, haute couture is a “protected name” that can be used only by firms that meet certain well-defined standards. However, the term is also used loosely to describe all high-fashion custom-fitted clothing, whether it is produced in Paris or in other fashion capitals such as London, Milan, New York or Tokyo.

The couturier Charles Frederick Worth (October 13, 1826–March 10, 1895), is widely considered the father of haute couture as it is known today. Although born in Bourne, Lincolnshire, England, Worth made his mark in the French fashion industry. Revolutionizing how dressmaking had been previously perceived, Worth made it so the dressmaker became the artist of garnishment: a fashion designer. While he created one-of-a-kind designs to please some of his titled or wealthy customers, he is best known for preparing a portfolio of designs that were shown on live models at the House of Worth. Clients selected one model, specified colors and fabrics, and had a duplicate garment tailor-made in Worth’s workshop. Worth combined individual tailoring with a standardization more characteristic of the ready-to-wear clothing industry, which was also developing during this period. 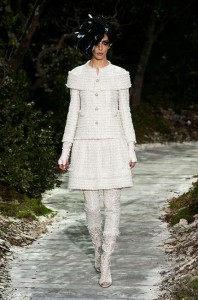 In the 1960s, a group of young designers who had trained under men like Dior and Balenciaga left these established couture houses and opened their own establishments. The most successful of these young designers were Yves Saint Laurent, Pierre Cardin, André Courrèges, Ted Lapidus, and Emanuel Ungaro. Japanese native and Paris-based Hanae Mori was also successful in establishing her own line.